​DEMO-SHOP
Bestellungen werden nicht verarbeitet und verschickt.
Cookie preferences
This website uses cookies, which are necessary for the technical operation of the website and are always set. Other cookies, which increase the comfort when using this website, are used for direct advertising or to facilitate interaction with other websites and social networks, are only set with your consent.
Configuration
Technically required
These cookies are necessary for the basic functions of the shop.
"Allow all cookies" cookie
"Decline all cookies" cookie
CSRF token
Cookie preferences
Currency change
Customer-specific caching
Individual prices
Selected shop
Session
Comfort functions
These cookies are used to make the shopping experience even more appealing, for example for the recognition of the visitor.
Note
Statistics & Tracking
Affiliate program
Track device being used
Categories

This premium coffee is the perfect union between tradition and innovation. Since 1933, it is their passion for quality that has been the foundation for illy's success. illy coffee is among the most renowned and well-respected coffee brands in Italy. Every day, up to 5 million cups of illy coffee are consumed. Their secret is a strict selection process of Arabica beans in order to do justice to the daily demand for top quality. The gently roasted Arabica coffee beans never cease to impress with their harmonious and rich aroma, as well as a perfectly balanced flavor spectrum whose consistent high quality is appreciated by espresso connoisseurs across the globe. illy cafe provides perfect coffee enjoyment, using the best and the greenest coffee that nature has to offer, refined by high-quality processing with the latest technology. illy coffee indulges the palate, like the classic with the former red lid Caffé in Grani espresso beans. The classic blend is balanced in flavor, a playful game between powerful intensity and amiable nobility. During brewing aromas of caramel, chocolate, toasted bread, and light floral scent unfold. 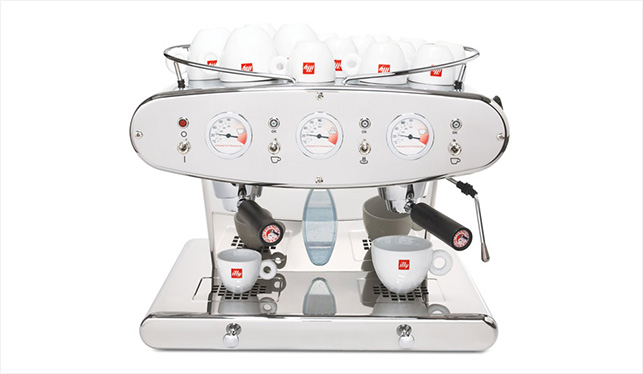 The roots of illy quality

The illy coffee shop was founded in 1933 by Francesco Illy, a brilliant inventor and businessman. In 1935, in Trieste, the city of coffee, he developed the "Illetta" coffee machine - the grandmother of all modern espresso machines - and the pressurization system for e preservation of coffee beans. His son Ernesto founded the first coffee laboratory in the world. In 1974, illy patented the ESE system, which is still very popular today.

Today, in the third generation, illy coffee maintains the same quality requirements. illy looks after the quality at every step of the process, from bean to cup, a task that the company is committed to in order to ensure long-term consumer satisfaction.

"To satisfy consumers all over the world with excellent coffee, with an experience that involves the senses and the mind."

The philosophy of illy coffee can be expressed in one sentence, a single belief that has been handed down over the centuries, as if it were the most precious element of the company's heritage.

To ensure that you receive the highest quality coffee blend, over 500 coffee farmers and workers are involved in illy's training program, which promotes the harvesting and processing of only the finest green coffee. Subsequently, each bean is analysed by an electronic system that eliminates non-compliant or not fully ripe beans. From the arrival of the unroasted coffee to its delivery in cans, illy's espresso passes through 114 controls.

During the years of success, illy has been able to accumulate 4 certifications that attest to the quality of its coffee, as well as a certification that attests to its sustainability. This enviable result is due to the company's deep respect towards its supply chain and the product itself.

"The function of the industrial enterprise is fundamental and indispensable, but the economic perspective alone cannot be enough to legitimize the work, having to be integrated with respect for man, the community and the environment". With these words, in 1976, Ernesto Illy marked out the values on which the company was founded and still rests on today.

In fact, it is still in this line that Illy follows his course. Illy recognizes a central role for all Human Resources employed in the production of his qualitative coffee. A solid testimony of this is the numerous illy Coffee Universities, which certify baristas all over the world. Moreover, the Transparency policy, encouraged by the company, dialogues with its customers to guarantee a service up to the high-quality standard required for its coffee.

The same principle is applied to producers, the respect for whom becomes one of the distinguishing marks of the illy brand. Their products, cultivated sustainably with protection of the nature of the various countries of origin, guarantee not only a quality bean, but also a policy of sustainability and development. The growers' stories are an integral part of the company's history and demonstrate that a world where quality and respect go hand in hand is possible.

The best espresso from illy?

In order for the beans to develop the substances that form their aroma at a consistently high quality, the raw coffee is only roasted after mixing. The beans are then cooled by a controlled airflow.

Packaging the coffee by pressurization in a protected atmosphere allows illy to preserve the product for a long period of time. This acts as an additional maturation period that further improves the already excellent properties and makes the final product in the cup even more valuable.

illy espresso in the world

illy works non-stop to bring a cup of Italian espresso outside the borders of the country. During its long activity, the company has managed to open more than 250 stores distributed in 5 continents.

Each store is a fascinating place, designed according to the company's philosophy of sustained quality, and offers a sensory experience identical to that which can be enjoyed in Italy - an espresso with an intense, aromatic and balanced flavour.

A coffee that looks to the whole world, just like its beans, which come from India, Brazil, Guatemala, Costa Rica, Colombia, Ethiopia, but that does not forget its Italian roots with which it has built its identity.

The Art of Coffee and Coffee in Art

illy has always distinguished itself for its commitment to combining art and coffee. Its collections of cups are developed with the participation of artists such as Marc Quinn, Ron Arad and many others, who have reinvented the image of the white porcelain cup in beautiful collectibles.

Always projected towards fashion and taste for beauty, illy is also a sponsor of the Venice Biennale and the National Chamber of Italian Fashion. It participated in the Milan Expo in 2015, to promote its philosophy of sustainability and respect for the supply chain, which was even depicted by the famous naturalist photographer Sebastião Salgado in his collection called "Profumo di Sogno".

In short, quality is something that illy promotes even outside the cup, to increase the value of culture and to promote beauty.

In its iconic jars, illy offers a selection of carefully elaborated blends in order to provide an exclusive choice that revolves around the 3 final flavours: Classic, Intense and Decaf, which are found both in whole beans and ground. For the Classico and Intenso blends there are even different degrees of grinding: for espresso, mocha or filter coffee.

The real difference between these blends is the amount of roasting. Classico offers a balanced coffee, perfect for every situation. You are never wrong with the Classico roast.

The Intense roast is composed of a 100% Arabica blend, with a strong and full-bodied flavour and a low level of caffeine and bitterness. The perfect coffee to fill every morning with energy.

Finally, the decaffeinated coffee is characterized by a round, elegant and persistent taste, with fruity notes. The perfect coffee for those who do not want caffeine. In fact, decaffeinated illy has a caffeine content of less than 0.05%, but when tasted it is as full-bodied and aromatic as a traditional espresso.

Alongside the classic choices are other varieties with a spectrum of flavours and more exclusive qualities. We are talking about the Monoarabica of illy Arabica Selection: beans selected from monocultures, unique in the aromas and characteristics that distinguish them. India, Guatemala, Ethiopia, Colombia and Brazil. Each of these blends maintains the fragrance and the rustic, characteristic flavours of the land it comes from, focusing exclusively on the flavour notes of Arabica.

The E.S.E. pods system, which, as mentioned above, has been created and patented by illy and which boasts the practicality of being used in pod and arm machines, is flanked by a rich selection of capsules, designed to meet the need to obtain a quality coffee in an easy and, above all, fast way.

The "Iperespresso" system used by illy is the top and richest system of the range, compatible with the same selection of bean blends, Classic, Intense, Decaf, Long and the varieties made from monocultures.

A long tradition of growth, taste and culture, combined with respect for the places and people who drink and produce illy coffee.

illy interprets the italianity of coffee as an extended concept, which is not limited to the ultimate product, but embraces the rhythms, characteristics and diversity of the story behind this drink.

All this to emphasize that coffee is much more than the content of a cup, it is a real dimension of pleasure, relaxation, and culture that we Italians want to bring into the world.