In the meantime, the coffee & espresso from the Dinzler coffee roasting company is one of the most sought-after and popular in all of Germany. The traditional roasting company from southern Bavaria was founded in 1950 and even then placed great emphasis on quality and variety. Here, coffee is produced at a very high level. Only the very best raw beans are used, which are then refined in gentle long-term drum roasting. At Dinzler, coffee is more than just a term. It once sparked a passion that has not been extinguished to this day. Read more ↓ 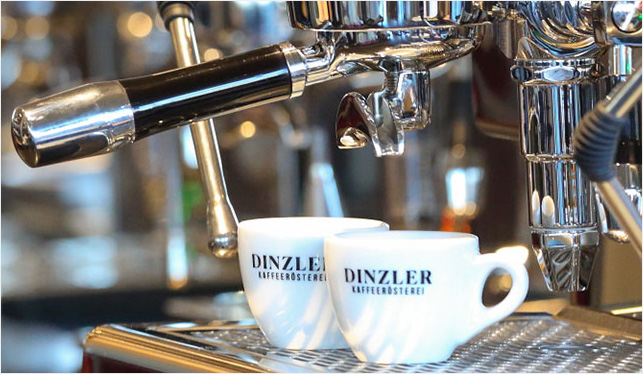 Filter
Close filters
No results were found for the filter!
10522

South German traditional craft since 1950
At the Dinzler Coffee Roastery, the term "German craftsmanship" is alive and well. Whether in the coffee itself, the presentation or the entire concept - Dinzler stands for very high quality and perfected products.

It is the late 1940s. Germany is at the beginning of its economic and cultural heyday. A new beverage is about to establish itself throughout the country. Coffee.
Coffee beans have been around in Germany and Europe for several centuries, but the fine art of espresso roasting was only perfected with the onset of industrialization.
The Dinzler Coffee Roastery was one of the first German roasters to import raw coffee beans in large quantities, making coffee available to everyone. Before that, roasted coffee beans were only a luxury good for the upper class.

In 1950, the company's founder, Otto Dinzler, began using a drum roaster to twist beans. He then sold these to neighbors and friends in the community. The response was so positive that Dinzler decided to expand his passion and open a real roasting plant in his hometown of Bischofswiesen.

In 1962, his son Klaus took over and officially turned his father's business into the first coffee roastery in southern Bavaria in 1966 - the Dinzler Coffee Roastery.

He carried within him the will to raise the company to an even higher level. Only the very best raw beans were to be considered for the different varieties and, in addition, the entire roasting process was to be perfected. The concept bore fruit, and DInzler became one of the first roasting companies in southern Germany to cooperate with restaurants such as WMF and Franke.

This is how Klaus Dinzler got to know the representative Franz Richter over the years. Together they developed new coffee and espresso varieties. This also resulted in one of the first roasted espressos in Germany and also DInzler's classic - il Gustoso Espresso.

In 1997, the Richter family finally took over the company. The basic structure and philosophy remained the same, with only a few renovations and changes of location. Most recently, the new roastery and headquarters were built in Irschenberg. In addition, in 2018 the new building otto, named after the founder of the DINZLER Coffee Roastery, was added, which invites to regular culinary and cultural events.