If you like your coffee strong, then Caffe Borbone is just right for you. A high proportion of Robusta ensures a very full and pronounced body. Caffè Borbone is an Italian success story in which a local coffee roaster has quickly become one of the top names on the national market and the leading supplier of capsules and pads.
The Arabica beans come from Central and South America and the strong Robusta beans come mainly from Central Africa. Perfect southern Italian blends for strong espresso and chocolaty cappuccino. One of our current favourites. Read more ↓ 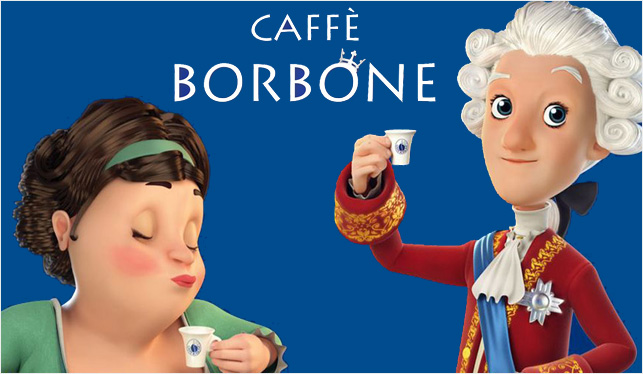 Filter
Close filters
No results were found for the filter!
10092

1-3 Workdays Extended delivery time
Please note that if you purchase this item, you should expect a longer delivery time for your entire order. We cannot ship other items in your order, that are in stock, ahead of time.
Product Code:  10824

No, Caffè Borbone does not want to be one of many, but a continuous source of innovation and inspiration. A company focused on new technologies, to present the unique and incomparable Neapolitan coffee to the world.

However, to fully understand who Caffè Borbone is, we will travel back in time and return to the second half of the 1700s in Naples, the first city in Italy to install running water and sewage in homes. Especially in this historical moment, Naples already had a particular coffee culture, which has been perfected and improved in terms of quality over the decades. Even today, coffee remains the symbol of the city and the pride of the Neapolitans.

But what does this have to do with Caffè Borbone? In a short time, the streets were filled with cafes, which were real cultural centers. During this period the famous Caffè Gambrinus was born, which still retains the charm of the Naples of the past.

Much more than we think. It is not by chance that the Bourbon brand takes the name of a Naples of the past. The name belongs to one of the oldest royal houses in Europe. Bourbon is the name of a French noble family, of seven French kings and other monarchs of other European states. Currently, the heads of state of Spain and Luxembourg are made up of members of the Bourbon family.

Royal House of Bourbon of the Two Sicilies

A taste of history

Tasting a cup of Caffè Borbone means becoming part of a way of living and thinking about the coffee break. Bitter or sweet strictly served in a cup hot at the right point: this is where the Borbone coffee releases its main qualities, with sweet and persistent cream, a strong and fruity aroma, which shows a very low hint of acidity from the first taste, confirmed by the balanced and refined taste of the coffee.

In short, an excellent coffee, which even if it cannot boast a centuries-old tradition, like other local brands, can always show off the speed with which it has established itself in the heart of the Neapolitan public, one of the most demanding and traditionalists regarding the much loved dark drink.

It will be the royal charm of the image that this coffee transmits, it will be the strong roots and the appreciation for the land that gave it origin, but Borbone today represents Southern Italy like few other coffee brands.

Its identity is a tribute to the tradition, history, and warmth of the Neapolitan people, but also to the culture of the whole peninsula: the company takes the initiative to become a partner of some of the most important and representative artistic institutions of our country, like the great “ Teatro alla Scala ” in Milan, a sign of the meeting of two traditions, that of the North and that of the South.

A modern coffee and a traditional flavor

It is no coincidence that Caffè Borbone is so appreciated not only in Italy, but also abroad, thanks to the quality of its product and the strength of its wide range of items to choose from, which satisfies both lovers of traditional coffee, prepared with mocha, both those who prefer to use pods or capsules instead.

For lovers of coffee made from a bean "with the crown", one of the most popular blends of Borbone is the " noble blend ". A delight obtained from Arabica and Robusta crops specially selected to obtain a very balanced taste and texture. The result is a versatile coffee, which adapts to any moment of the day, from waking up to after dinner, thanks to its balanced doses of caffeine, which allow you to get the right amount of energy and give us a clear example of the quality standard. that we can expect from this coffee.

The noble blend, also called blue blend, is available in beans, in the bar pack, in ESE pods, and in Nespresso compatible capsules. In fact, if we want to fully discover the potential and the nuances of the taste of this coffee even at home or in the office, we must turn to the world of single-serve, the field in which Bourbon absolutely does not fear competition.

Caffè Borbone offers a decent selection of 44mm pods, all compatible with the ESE system, the open system created specifically to achieve maximum compatibility between machine and single-portion coffee. The pods are also eco-friendly and compostable, except for their sealed envelope that contains them, which allows the internal microclimate to preserve and keep the coffee fragrant as if it had just been ground.

The pods are available in different blends, such as Red, Blue (Noble), Black (Strong), or Gold (Supreme). You can start the day with a black pod, rich in caffeine, and with a strong and decisive flavor, perfect for an awakening full of energy. The Red blend, on the other hand, is perfect for palates who seek all the power of the Black but prefer a more rounded and balanced flavor. Finally, Blue and Gold are ideal to end a good meal or enjoy a relaxing break thanks to their balanced and persistent flavor and caffeine content.

In short, a fair choice, which we find equally vast when talking about capsules, the other strong point of the Borbone range.

The capsules are perhaps the flagship product of this offer Neapolitan roasting more ranges created with the intent to extend compatibility to all the most famous and popular systems like the system "On my way" or the system Lavazza " Dolcegusto ”by Nescafè, or the more sought-after “ Nespresso ”.

For this reason, there are several sizes of Bourbon capsules, however, united by the offer in terms of taste and quality. Borbone capsules can really enter everyone's homes thanks to the super-compatible formats that have earned them the popularity of one of the best home-brewed coffee bars.

The choice of flavors echoes exactly that of the pods: the Black ( Decisive ) quality, stronger and more intense, Red for a bitter but more balanced coffee, Gold ( Suprema ), for a relaxing and pleasant experience, and Blue ( Nobile ), for a coffee with a round taste and texture.

Overall, an offer that covers all the nuances of flavor to meet the tastes of all coffee lovers.

In short, there is always the right capsule for every need and to enrich every moment of the day.

The future of the company

Caffè Borbone is one of the most successful roasting companies in Italy and abroad, especially, as we have seen, in the field of single-serving coffee.

Innovation, courage, respect for the quality of the raw material, and the supply chain, but also a strong identity that draws its roots from an equally strong tradition. These are the factors that make Bourbon coffee a winning recipe.

Not surprisingly, the real coffee is climbing the rankings to reach the top of the most popular coffees in Italy and in the world, also arriving in the United States to bring a taste of real Italian espresso even overseas.

An advertising campaign, always guided and supported by starred chef Antonino Cannavacciuolo, in the name of originality, culture, and entertainment wins her an interesting place in the future of the strong competition between the great Italian roasting companies. But the company can take advantage of the appreciation of the first interested parties: the coffee drinkers.

For two consecutive years, in 2019 and 2020, Caffè Borbone wins the Quality Award, a recognition conferred by the same coffee drinkers placed in front of a cup of espresso, who have decided to elect the Borbone capsules and its Blue blend as high-quality products.

In short, the greatest test, the choice of the public, has been overcome and so the company can finally boast the recognition of this great result.

In the future of Borbone, there is growth, improvement, but also awareness and eco-sustainability, which starts from a solidarity supply chain and reaches our homes and coffee capsules.

In the near future, we will also be able to have fully compostable capsules with a low ecological impact. For now, we still have to rely on the awareness of coffee drinkers and on the attention and care they put towards the environment, but who knows what other surprises still await us in the years to come from the tireless experts of Bourbon.

Drinking a cup of Caffè Borbone is not just a moment of relaxation, but an overwhelming experience. A ritual. You never say "no" to a coffee in Naples. The first city to introduce the so-called " Caffè Sospeso ". No one, however poor he is, should give up the pleasure of espresso. Having a coffee at the bar also means talking to friends, being part of society.

Despite its great growth, Caffè Borbone remains a family that has grown over the years with dedication and passion for coffee. The preservation of the Southern Italian coffee tradition does not obstruct the view of the advantages of new technologies. In order to produce a consistently high quality product, attention should be paid to the latest developments. This is the only way to meet current customer needs.

The secret of Caffè Borbone 's success lies in the careful selection of raw coffees and in the careful roasting procedure. This must be monitored and controlled 24 hours, day and night, through automated technical support.

Try this " royal coffee " and convince yourself of its high quality at a more than reasonable price.