​DEMO-SHOP
Orders will not be processed and shipped.
Cookie preferences
This website uses cookies, which are necessary for the technical operation of the website and are always set. Other cookies, which increase the comfort when using this website, are used for direct advertising or to facilitate interaction with other websites and social networks, are only set with your consent.
Configuration
Technically required
These cookies are necessary for the basic functions of the shop.
"Allow all cookies" cookie
"Decline all cookies" cookie
Amazon Pay
CSRF token
Cookie preferences
Currency change
Customer-specific caching
Individual prices
PayPal payments
Selected shop
Session
Comfort functions
These cookies are used to make the shopping experience even more appealing, for example for the recognition of the visitor.
Note
Statistics & Tracking
Adcell
Affiliate program
Google Analytics
Google Tag Manager
Track device being used
Categories

Today, Barbera Coffee is one of the most consumed coffees in Southern Italy. And we understand why. In 1870, Domenico Barbera began roasting coffee with a small machine on the streets of Messina. The perhaps oldest roasting company in Southern Italy continues to be owned by the family. The small coffee magician is the trademark of the traditional roasting house. Which is why the premium blend is called Barbera Mago (the Magician).

→ The „Magician“
→ Monitoring the quality 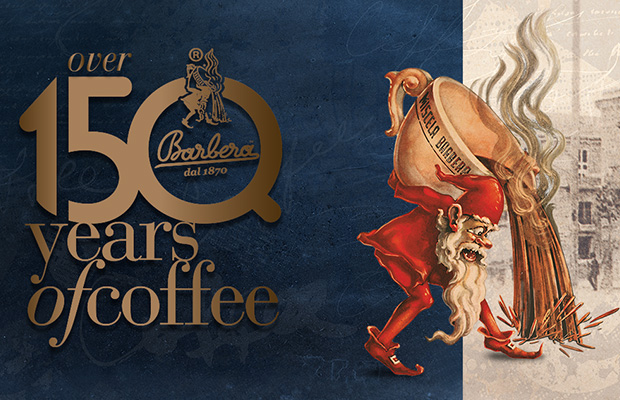 Filter
Close filters
No results were found for the filter!
1595

BarberaIn 1870, Domenico Barbera, originally from Piedmont, began roasting coffee with a small machine in the alleys of Messina in Sicily.

The "magician," as his customers affectionately called him, expanded his small business. Soon a new coffee roasting machine was acquired, with the mysterious name "Tornado". Now the Barbera family could proudly roast up to 30kg of coffee at a time.

In 1903 Domenico died very suddenly, leaving his son Antonio to take over the family business in the second generation. Antonio felt equally committed to the family tradition and to the further development of the roastery.

The quality of the coffee, the management of the finances, and the marketing of the coffee were just a few of the many issues that needed to be addressed in order to help Barbera Caffe achieve long-lasting success.

His efforts were crowned with success: between the two world wars, the coffee of the "Magician" was the most drunk coffee in southern Italy. Then, in 1947, Antonio's son Letterio opened a new coffee roasting plant in Naples. This was not without risk, as Naples already had an excellent coffee culture and a number of very good and established roasters. But the willingness to take a risk paid off, because in the end the company built there was a complete success.In 1951 Letterio was able to open its first branch in Milan. With the help of a network of many vendors, the magic coffee was soon enjoyed throughout Italy.

In the 1950s, the era of research and development began. New roasting machines, monitoring of quality, improvement of each step and development of new products were things that Barbera also had to face. After Carmelo, Letterio's son, returned from the United States as a food chemist, he set up Italy's first coffee laboratory, thus improving and developing the individual production steps on a scientific basis.

A simple step, but one that made a big difference. In collaboration with the International Coffee Society, Barbera was the first coffee laboratory in Italy to publish in prestigious journals. The fifth generation also ensures that Barbera grows and becomes internationally known and loved.

Caffe Barbera is now a large company that has won many prizes and various awards due to the excellent quality of its coffees.

Caffè Barbera, the Neapolitan roasting company founded in 1870, has relied on SolarSicily to increase its sustainable contribution & embrace a ''Green'' production for all its products.
The installation of the new photovoltaic system has been placed on the roof of the factory located close to Naples, Italy. An important step in the direction of sustainability for a company already ISO 9001 certified.

Thanks to this installation, Caffè Barbera is able to satisfy the entire needs of its production which will transform the company to a true Eeco-Sustainable reality, using energy from its own renewable & clean energy source to produce the unmistakable premium blends of the ''Coffee Wizard '', which are today exported to over 65 countries worldwide.

This website uses cookies, which are necessary for the technical operation of the website and are always set. Other cookies, which increase the usability of this website, serve for direct advertising or simplify interaction with other websites and social networks, will only be used with your consent.
Configure Accept all